The other day my boss heard me exhale. It was one of those long exhales at the end of a short encounter with him and my mind was reeling from all I had to do and ws making mental lists of things I had to accomplish pronto. We are mailing out a survey on the 26th and I've been working on validations and fixes non-stop for several weeks.

Our sponsor is known for taking their time on things despite the firm mail-out date, for example, we just got the final form last week. So my boss tells me I wasn't allowed to breath yet, had to wait until mail-out. Yesterday we pushed the survey out to the public server so the sponsor can do their testing. (I hope they know they don't have until March.) So, today I can breathe a bit until the testing results come back to me and I have another list of things to do.

I've been working through a pile of Girl Scout vests in my spare time. I've gotten five done in the last week or so, but the pile isn't diminishing any. I hate sewing those badges on when there's not a lot of room left for them. I raised my rates again to $40 so the workload is more palatable.

There should be a package on my porch right now for me (aren't tracking numbers and the Internet the greatest?) containing a new bolt of muslin to dye and two new dyes. I plan on dyeing a slew of fabric this weekend so it'll be ready for our bee's next exchange project next Wednesday. I'll post pictures of my dyeing adventures. If I can find my card reader, that is.

I was rooting through old photos and found this one from 2003. Enjoy. 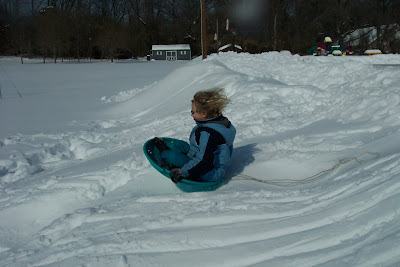 And it's remotely related to: hand dyed fabric, home business, Life at the office

wheeeee!
Nothing beats a long slow exhale after holding it all together for a while.

You make me very glad I am retired

Im exhausted and I didn't even understand any of that!

What a great action shot.