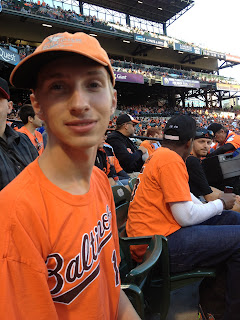 Kevin and Cali and Autism

My husband maintains the autistic brain has two pathways. The pathway for babbling and self-stim speech and the pathway for real speech, real expression. Kevin, my autistic son, will be 20 next week, and we have been observing his speech as he's grown. Slowly his real expression has become a larger percentage of his total speech.

I find it interesting to note what triggers real speech from him. In a typical day, his real speech comes from answering questions and he'll only answer questions he wants to. At home, most of these have to do with food, like "What do you want to have for dinner?" He rarely expresses something without a prompt. But it's there and I take joy when I experience it.

The first time I remember impromptu speech was when he was 10 or 12 or so when we picked the kids up from aftercare. Somehow the routine was off that day, maybe our daughter got in on the opposite side of the van, so the door on Kevin's side was still open. As we started to back out of the driveway he exclaimed the door wasn't closed. Dan and I stared at each other in amazement.

We have a new member of the Anneshouse household. Cali is a dog we acquired from CG's fiance because her son is very allergic and Cali couldn't live with them when their households were combined. Cali's a wonderful dog, about 9 or 10 year-old chow-lab mix, very settled and calm.

Kevin has been afraid of animals for as long as we can remember so we took on Cali with much trepidation, but hope. In the beginning he couldn't be in house at the same time as her. We used a lot of pet gates to keep the two separated but visible to each other. Dan tended to be more conservative when it came to getting Kevin acclimated to Cali than I was. I wanted to carefully force issues to show Kevin she was nothing to be afraid of. I would hold his hand so she could take a treat from it even though he'd pull back as soon as he could.

Fast-forward six weeks and Kevin now pets Cali and freely gives her treats, no gates are used, and he even reluctantly takes her for occasional walks. The other night I sent Kevin out with Cali on one such walk. He told her to "sit" so he could snap the leash on. They then went ahead while I got my shoes on. When I caught up with them I heard him talking to her with very expressive language. She likes to smell everything, as dogs do, sometimes taking them well off the path. Kevin was very clear about telling her where to go and where she didn't belong. I was thrilled. I am thrilled. I'm glad gently forcing Kevin to do things out of his comfort zone has improved his expressive speech and opened up that pathway more.

Another Attempt at Blogging and Quilting

I just was reading Terry Grant's blog about her malaise.

It seems to be going around, I've felt like that for a while: so much fabric so little inspiration. I hadn't sewed on anything fun in months, six or more. Then I worked on a wall hanging a few weeks ago, picture below. It had been a work in progress for two years or more. It is waiting for borders and to be finished and my muse left the building.

Last week I bought one of those grocery store quilting magazines, I don't remember which one, I think it had a blue/yellow/green quilt on the cover. It was an impulse buy. I was pleasantly surprised when inside was a pattern for a super-sized shoo-fly quilt. It spoke to me as a college quilt for my daughter since she's a high school senior this year. I asked her to go through my stash and pick out some fabric she liked. Because the blocks are so big I needed nearly a yard of each one. I needed to cut  12" and 11 5/8" squares. You'd think you could get three of those length-wise from a yard of fabric, but you'd be wrong. It seems the common length of a yard of fabric is really 34". It was very aggravating trying to cut the squares when you're not working with a full yard.

Why is it then, when inspiration strikes, the path is never the envisioned one, the smooth and easy one? 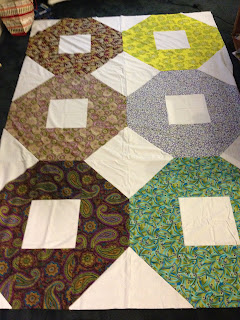 What I Worked on Over the Weekend 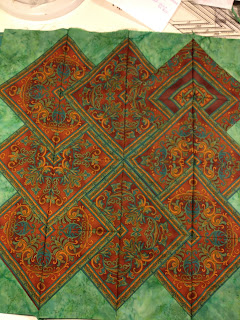 I've been challenged by my quilt guild and bee members to post more. I think that would require me actually doing more to have fodder for posts. Heaven forbid I should admit I watch a lot of TV.

Ok, so here is the latest news: We came back from vacation to a dead fridge, termite damage requiring the garage door frame to be rebuilt, a bill from the IRS for the tax on profit on mutual funds I forgot to report, and a dog.

Unique view of the Bay Bridge from the vacation: 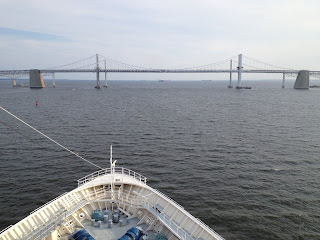 I cleaned a little

Holy cats! It's been ages since I posted. The world, my world has changed since then.

First, (because VE keeps asking) let me report I've finished one of the socks in the pair shown below, the other has been started, ripped back, and is now waiting for progress. Like you are with this blog.

Second, the husband retired in March with a buy-out option Census offered. Life has been interesting adjusting to this. I miss having him here at work in the building. He was good for a distracting email or instant message when I needed it. I miss the carpool parking pass which provided better parking ops. I like that I'm not loading and unloading the dishwasher as much any more, almost never, really. (Thanks Honey!)

I have a senior in high school now, and life is full of SATs, AP results, and college visits. Sorry, kid, we spent all your college money on vacations. 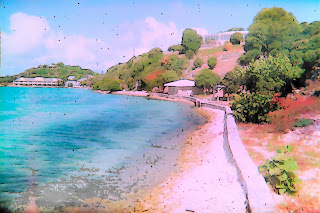 I'll try to remember to come back again and post more. 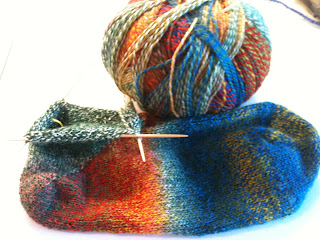 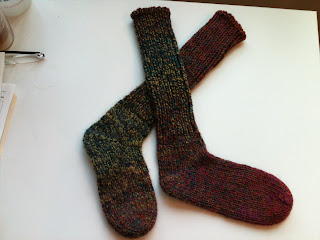 These socks for Fern are finally done! 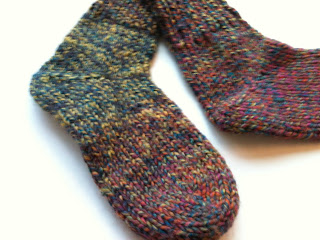 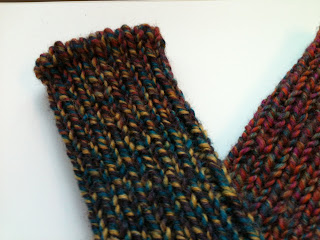 And it's remotely related to: knitting, photo from the iPhone, socks

What I Did Over Christmas Break 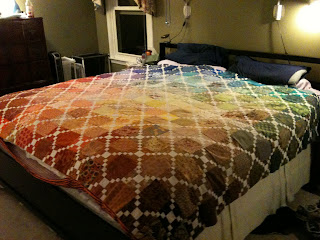 If you scroll down, you can see the picture of this when I was laying it out on the conference room table. I spent a lot of time over break sewing the blocks together. I don't have any space large enough in my house to get a good look at it, my bed is the closest. The next step is to put on the borders. I'm hoping to borrow a friend's long arm machine to quilt this monster. With borders on, it'll be 116" x 90"!
I started this post at 10:13 4 comments:

And it's remotely related to: photo from the iPhone, quilting
Newer Posts Older Posts Home
Subscribe to: Posts (Atom)