I think we tuckered The Boy out 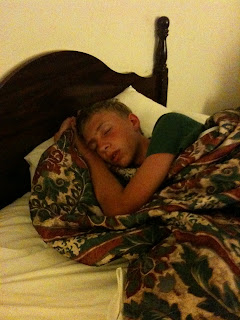 The tail of a humpback whale 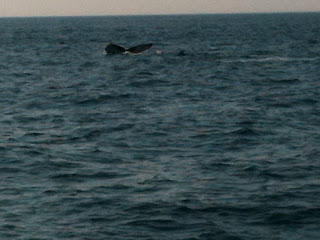 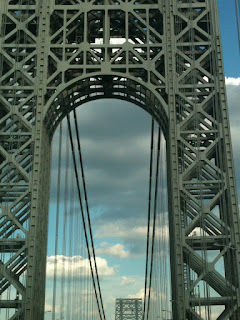 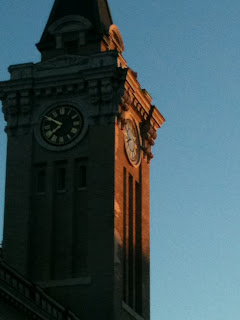 Kevin Engrossed in the Kinetic Sculpture 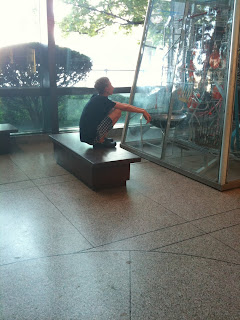 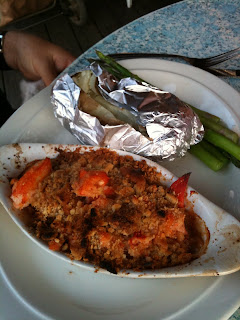 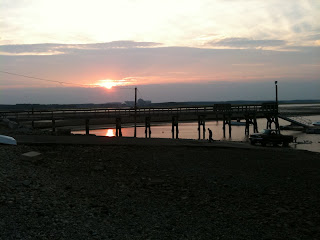 It's Blooming! and other discoveries 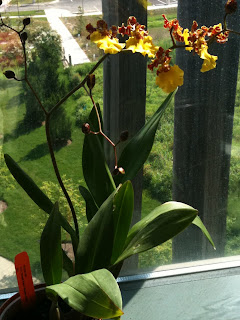 When I got into the office this morning I was delighted to find my oncidium orchid (Sweet Ears 'Pacific Gold') had started to bloom.

Apparently, I have an accent. Saturday, I went to my niece's house warming party. One of her other guests asked me where I was from, that I didn't have the typical 'Maryland' accent and couldn't place what accent I did have. I was kinda flabbergasted. I don't have an accent. Moi?

A couple of trees in our yard sustained damage from the seven feet of snow we got this past winter. I finally called a tree company to take care of the damage. $1475 to remove two trees and trim some branches! Yikes. Seems high to me so I called another company and they'll be out tonight.

I have nineteen Girl Scout vests in queue to be worked on before school starts. I'm ignoring them and have been. I'm out of glue sticks and have been waiting for the stores to start with their back-to-school sales so I can stock up. I use the glue to hold the badges in place while I sew them down. I've also been procrastinating on the badge work because I want to take July off, and because I need to get other projects worked on, like the baby quilt I posted blocks for the other day.

No way I have an accent.

And it's remotely related to: growing stuff, quilting

60% of the baby quilt blocks are done! 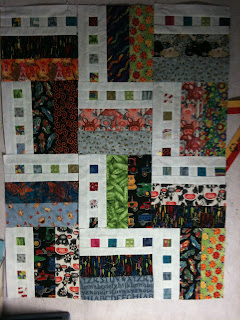 It's been so long since I posted anything of substance.

I'm not sure the following could be considered "substance" or not, however.

Friday 7/9, Kevin, with his Special Olympics swim team, were honored at the Bowie Baysox game. They got a pre-game introduction, two guys got to throw out the first pitches, and many team members got to run out to the bases with the team. Kevin got to run out to second base. He stood there during the National Anthem, then sauntered back while the rest of the kids ran. That's my boy.


All the fertile office co-worker's wives have given birth and I'm still working on the last baby quilt. I have 10% of the blocks done (of 20) so I have a long way to go.

I'm trying to stay on top of the laundry instead of leaving something in the washer for a couple days or having two or three baskets of things that never got folded while warm and now need to be re-fluffed.

The kids have been back from camp for over a week now and I'm almost done with their laundry. The Boy brought back some clothes with someone else's name written inside. I still need to put them in the post.

I've been listening to BBC/Radio 1 a lot via the Internet and satellite radio in the new car. The Internet plays in real time, but Sirius time-delay's the show by five hours. Kinda messes with the mind a bit.

Wednesday 7/7 was our twentieth anniversary. Dan and I took the day off from work and played golf, then had dinner at Cityzen downtown at the Mandarin Hotel. Yum.

I took a golf lesson Saturday morning from Troy Beck. I'd totally lost the ability to hit fairway woods from the fairway and wasn't getting any real distance from my longer irons. She said I was standing up too soon because I was off balance, and that I was crowding my hands/arms. She had me stand farther back from the ball and gave me drills to practice keeping balanced. By the end of the lesson I was getting 125 yards out of my 7 wood!

Back in June I went to Columbus/OSU for a Perl conference. Perl is a programming language, not a misspelled adornment. I was born and went to college not an hour away from Columbus in Urbana. Some of my college friends were still in the area so I had an opportunity to catch up with some of them. I had lunch with Piper who had lived in the dorm room across the hall from me and is now working in Columbus.

One night I drove out to Urbana and met up with Martha and David at the college. It's really a university now, but I'm having a hard time changing the name in my mind. We walked around campus remarking on all the changes made in the last thirty years and reminiscing about fellow students. My grandmother taught biology and botany there and had her lab/classroom and office in a lovely old building, Barkley-Baily Hall, which since has been turned in to plain classrooms, probably in the English department. The college built a new science/math building in which my grandmother is supposed to have a memorial classroom, but Martha hadn't seen it on a previous visit and I didn't look for it myself. While I was in town, I also drove past my grandparents old house and visited them at the cemetery.

I was supposed to meet up with another friend, but she didn't make it back into town in time. I was bummed. I hadn't seen her in years.

Fern went to ice skating camp for a week and came back pretty jazzed to skate at Worlds in Boston at the end of the month. Now she has a week to cram in all the lessons she can before she competes. Most of her events have seven girls in them. I sure hope she does better than last, I don't want her to be devastated and quit skating. She's so beautiful when she skates and I'm thrilled she has an activity she enjoys. She's been working at the snack bar at the pool and loves having a paycheck. She hates her bank because they are never open when I can get her there to cash the check. Should I let her get an ATM card?

I tried three times to get the new iPhone software to download before it was successful. The download took over 75 minutes each time and process would die with 5 minutes to go. I don't have the new iPhone 4 but I got many of the new features on my 3Gs with this download. Some of the new features are quirky and I'm still trying to figure them out. Oh well. I'd love to be a product test for Apple.

My brother and Roseanne finally opened their yarn shop in Culpeper, VA. I guess I need to visit sometime, huh?

We picked up Kevin at Camp Greentop, Mr. Obama appeared to be in residence next door 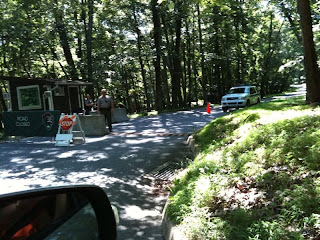