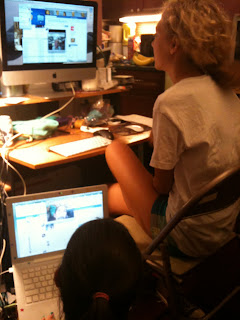 Hold on to Your Hats

Funny thing happened, Dan got hooked too. It's shown on the ABC Family channel every weekday at 5:00. On the Tuesday after labor day the series rolled around again to the beginning and now it's a thing, we get home from work and watch The Girls, then at 6:00, Friday Night Lights is on the same channel. Go Panthers. Dan will still flip to Around the Horn and Pardon the Interruption during the commercials, but he always returns to the Girls. (FNL is a good show to get obsessed about, too.)

I've seen all the GG episodes at least once now, and still enjoy them. Dan asked me how we missed the show when it was first on and I said "Survivor." The Girls were on in the same time slot. I've read different, conflicting things about why they stopped after seven seasons and I may never know the real truth.

Anyway, after I went through the series, either on TV or on DVD, I felt a sense of loss, just as if I had been watching weekly since 2000. Silly me. Now where do I turn? A quick trip to IMDB told me Lauren Graham, the former Lorelai Gilmore, is now starring in Parenthood on NBC and I had just "missed" the premier season. However, thanks to the Internet, I was able to catch up this summer.

Parenthood is a show about a large dysfunctional family, Mom and Dad, with four grown children and their own families. What appealed to me about Parenthood, besides Lauren Graham, is one of the grandchildren, Max, is newly diagnosed with an autism spectrum disorder and watching a "perfect" TV family deal with the complexities this disorder is of interest. Another thing that is appealing is there are two teenage girls on the show, again, something of interest to me.

As a side note, it was interesting to me to notice how long it took Lauren Graham to morph from Lorelai Gilmore into Sarah Braverman.

Season two of Parenthood premiered Tuesday night at 10:00. I think Dan would like the show too, but he's only seen last season's finale, which didn't introduce the characters well or show why I like it. Dan liked the Gilmore Girls by osmosis so I'll just have to be patient while he warms up to my new obsession just like I warmed up to FNL. But then again, Kyle Chandler isn't difficult to warm up to, at all.

And it's remotely related to: what's on TV

Wow, it's been a while since I've posted.

It's my busy season at work, I've got three huge surveys going live in January and I'm trying to make sure that'll happen. I've got oodles of developing to get done and I hope none of my clients throw a wrench into the process.

For Fern's birthday in July we gave her a weekend at the beach for her and two of her friends. This past weekend was it, I took the girls to Ocean City. It was a lesson in patience. It takes about an hour for three teenage girls to wake up in the morning and to cycle through the bathroom for showers after beach time. I tried to give the girls their space at the same time as being the parent on duty. I think everyone had a good time.

I've finished the rush of Girl Scout vests that were dumped on me during the summer. My in-box is empty, but I still have many other projects that require attention. Like the new pair of socks I'm knitting, because I just had to have a new ball of yarn from that shop on the boardwalk.

Long-time readers of this blog may have noticed I haven't posted anything about my Mendoza line in quite a while. That's because I've been over my I-shall-never-be-over-this-weight weight for almost two years. I was successful losing some weight last spring in preparation for our 10-day cruise so I could get into summer clothes. After we got back, I gained it all back and then some. It would have been very easy to just throw up my hands and change my Mendoza line, but I didn't want to, I didn't want to settle for that. I was past the edge where I should buy the next size larger clothes. I didn't want to go up that next size, I didn't want to discard what's in my closed (again) for new, bigger stuff. Dan's been doing Weight Watchers now and has lost some weight. I was watching what I was eating and lost a little, but wasn't really getting significantly nearer my Mendoza line. Now I'm doing WW with Dan and all I can say is "Wow!" First of all, I never realized how much I was eating until I started writing it down and assigning points to it. Secondly, when I started eating within my points range, the weight started to really fall off. The "just one more" mentality does make a difference. I didn't need just one more. It's getting easier to retrain that part of my brain that wants to snack all evening to a) eat a smaller snack serving, 2) eat a healthier snack, and iii) skip the snack altogether. I'm still above my line, but it's within sight, and I'm very excited about that.

I got called a "good mom" by a woman who was about to get her nipples re-pierced.

And it's remotely related to: knitting, Life at the office, Mendoza line, parenting, randomness

Kevin Behind the Wheel

And it's remotely related to: photo from the iPhone

Before and After: Removing a Snow Damaged Shrub 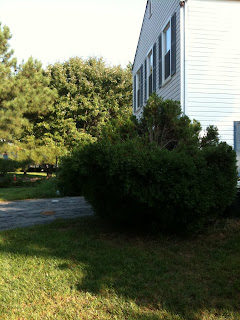 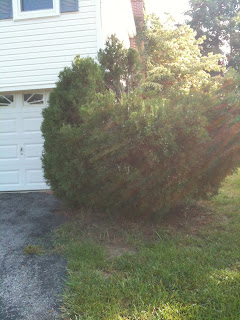 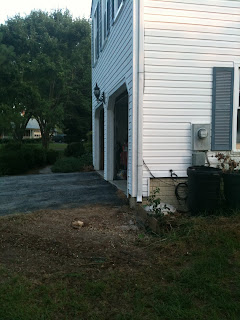 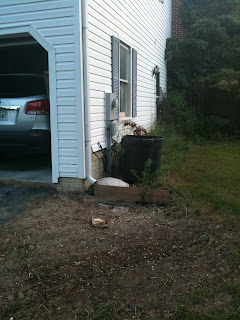 Back to School Night

Met all of Fern's teachers, most of them are decent. None will accept late work. She will have three HSAs in the spring and possibly one AP exam in Spanish. Her Spanish class is a combo 4/5AP class. The AP kids will get more work through out the year and will have to take the AP test. If the Spanish 4 kids want, they can take the AP test too. If they pass, they will retroactively get credit for Spanish 5/AP (which is worth more GPA points).

Dan met Kevin's new teacher. He has the same classroom aid as he did last year, which is good. She'll help the new teacher get to know the students and will provide some continuity to the kids.

I know, fun stuff here at Anne's House. Back to school night, oooh, fun. On the other hand, we're heading to the beach for the weekend, regardless of what hurricane Earl does. That, will be fun.