Are you ready for valentine's day? I got my first glimpse of what's to come when I saw red heart cookies in a bakery window this evening at the mall. Yikes. Red will be everywhere: cookies, candy boxes, underwear. Can you stand it?
My husband and Fern went to the 'Zards game tonight and Kev and I went to the mall. I had to exchange some headphones at the Apple store, the left ear had gone out. We dined at the food court, he Chick-fil-A, and I chose the chicken salad sandwich at Arby's. He was good, only disappeared a few times, each to a nearby escalator so I knew where he was. When he was about 5 or so we lost him, had no idea where he was. Even got mall security to help us. As it turns out, he had gone into the Right Start baby store. We'd only been in there once before, but he has an astonishing memory and knew they had cool things to look at. Now he hovers around me while I shop and I don't worry too much.
I'm reading Something Dangerous by Penny Vincenzi these days. It's the second of a British family saga trilogy. The first book, No Angel, covers 1904 to 1920, World War I. This book covers 1928 to 1946, World War II. Vincenzi is a British writer and therefore the spellings are British as well as the language. It's a different language style than the British version of Harry Potter so I can't figure out if that's her regular writing style or she is also using the style of the day, the time frame about which it's written. In any event, they are good reads so far and I recommend them. I'm even keeping a tally of the children conceived out of wedlock so far. (6!)
I started this post at 20:21 3 comments:

Merry Christmas to All! My house looks like Kansas after Dorothy got sucked into Oz: piles of presents everywhere, missing gifts, and bits of torn wrapping paper.

My great present this year was a certificate to golf school in South Carolina in a couple weeks from my darling husband. He's a great gift-giver.

I really enjoyed hearing Fern squeal when she opened her gifts. CG/AM got her some saxophone music, big squeal there. The new camera from her grandparents got a squeal too. Kev, on the other hand, doesn't squeal, but you know he likes something when he opens it right away and starts playing despite the pile of unwrapped boxes waiting.

One of the cool unexpected things my husband got was a comment on his blog from the leader of the band he was writing about.
I started this post at 10:23 4 comments:

Whew! The loaf of AM's homemade fruitcake is gone. Now maybe the numbers on the scale will reverse their current trend.
I started this post at 08:06 2 comments:

Fern and I were window shopping in Ellicot City, MD on Saturday and stopped in a jewelry store. The clerk offered me hot cider or mulled wine and I declined, but Fern said yes to cider. After a couple sips she didn't want any more and gave it to me. Hmm, tastes like wine to me. The clerk was beside herself, embarrassed and apologetic, I didn't mean to give your daughter wine. I was far more amused at the situation than upset with the clerk. And Fern has a fun story to tell.

Ellicot City is home of the oldest railroad station in the country and a nice destination for a day trip, if you like trains or like to shop in an "old town" setting. The rail museum has a nice holiday train layout set up to watch.
I started this post at 08:05 1 comment:

Do you watch Survivor? I'm in an office pool and drew Ozzy. During other seasons my pick has gotten eliminated very early, this year I'm hopefull. There are five players left on the show (Ozzy's one of them), and four money slots in the pool, therefore I have an 80% chance of winning money and a 20% chance of winning the whole thing. Statistically. Human nature and television producers can really mess up statistics. The pot is $90 for me if Ozzy wins.
I started this post at 09:45 No comments:

Now that I can see my fish, I added more. Last night I bought 8 large gold neon tetras and 4 cory cats. I think I got a bargain, I keep counting 9 neons, but then again they keep swimming around so I really don't know for sure. The big reason I have a tetra tank is because tetras school and I love seeing groups of fish swimming around together.
I started this post at 16:32 No comments:

Have you ever been in a public restroom stall and your change falls out of your pocket? How far did it roll?
I started this post at 12:54 1 comment: 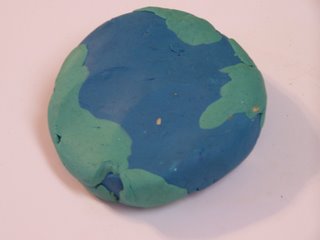 I woke up on Sunday and found that apparently the earth is flat.
I started this post at 09:30 1 comment:

My daughter is one strange bird.

My week-long project is finally coming to a close. My 55-gallon fish tank in my bedroom had been overtaken by algae, it was so thick in there I couldn't tell if I had any fish. (I did). I put them in a smaller tank on the floor and drained the water from the big tank and added copious amounts of bleach to kill the algae. The bedroom smelled like a natatorium for the week while I scrubbed the glass in spare bits of time. Everyday Fern would walk in my room and inhale deeply. She couldn't get enough of the smell. I guess I should be glad she's not attracted to the smell of natural gas, she'd have her head in the oven.

Yesterday I moved the little guys back into the main tank and by this morning they were adjusting again and the chlorine smell is dissipating. I made the stupid mistake of sliding the aquarium up against the wall without measuring for enough space behind for the filter (which was on the other tank at the time). Ever try to move a 55 gallon tank with water and rocks on a heavy wooden stand away from the wall without spilling a drop or removing the water? I did, and that's why I get to be Construction Girl's trusty side-kick.

Now that I can actually see my fish, I need to buy more. 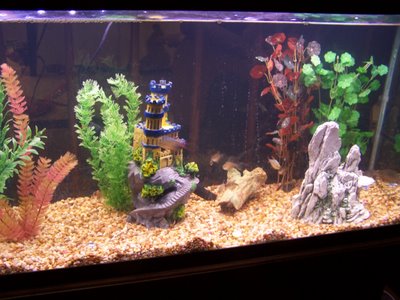 It's been a while since I've successfully machine quilted a quilt larger than a wall hanging. (never) I tend to do something easy, like straight lines or meanders. People always say I'm so creative, but the truth is I can follow a pattern so I just look creative, but I can't "see" the way to quilt something so it's not just another pile of boring fabric. I can't look at a quilt/block pattern and "see" plumes of sweeping feathers placed just so, or "see" how to fill an empty space where two blocks meet. I have and browsed many times "Quilting Makes the Quilt" and can see possibilities, but have no talent for transferring examples to ideas for my pieces.

I've been pondering this while working on a quilt I've been commissioned to make for Christmas. I only have two weeks to finish it. My friend picked out the pattern and the fabric and I've put the top together. She wants me to quilt it (as opposed to sending it out to a long-arm quilter). The pattern is 16" sawtooth star blocks with secondary sawtooth stars where four blocks come together. There is plenty of open space for nice quilting patterns which I could buy at the quilt shop (since I can't imagine them on my own). But that's another thing, I'm not sure I've got the skill to machine quilt a pattern without making mistakes. The quilt is for an 8 yo she isn't quilt savvy so it'll pass the 20 yards at a gallop test, but will it pass the "I'm proud of my work" test?
My goal, therefore, becomes: pick out a quilting pattern for this quilt that I can do easily, and be proud of, and is not just straight lines.

I got the quilt layered and pin basted so it's ready to go. I set up my new sewing computer with the chosen thread and the stitch regulator (the reason I bought my new machine in the first place) and made a test piece. I'm still shaky and the lines aren't very smooth. I'm very nervous about starting the actual quilting. How much more practice do I do?
I started this post at 09:18 2 comments:

I did a load of "fine washables" this morning. To prevent the straps from tangling and the underwires from bending in the dryer I hung them to dry in the laundry room (a la Marsha Mason & Richard Dreyfuss). Fern walked by, she's 11, and gasped.

I need your opinion. There is an annoying commercial on the radio for a housing development. "Come see Brookfield homes today," or something like that, emphasizing the word "home."

I say that structure that people live in, is a house. After you move in and live in it, then it's a home.

People make a house a home. What do you think?
I started this post at 09:28 3 comments: