I started a post last week after Memorial Day, but never got to finish it. Now I'll add in more current news and click "publish post" already.

The weekend was hot and also productive. Dan and I got most of the garage cleaned out and offered up many items up on Freecycle. If you're gonna have to find a mouse in the garage, it's better to find a dead one. Dan scooped it up for me. He's such a great husband. We bought Fern a new bike so she can ride to her summer jobs when she needs too.

I got Being There watched. I hadn't seen it for over 30 years and I'd forgotten a lot. It was still funny, but different than I remembered. The phrase "I like to watch" still makes me smile. 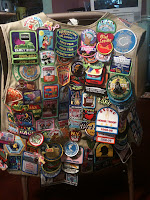 I got the badge sewing done on the vest I'd had for a while. I'm glad it's out of my hair. However, two more arrived in my in-box so I'm not done yet. I'd really like to quit, but I enjoy having the extra cash, it buys fun things like my iPad.

I can't remember what else I got done on Sunday. I'm sure it'll come to me later. Monday was hot was glad to be able to hang out at AM's house for her pool party.

This past weekend I flew solo. Dan went to the Eastern Shore for golf school. He's been so frustrated lately because he can't get any better even though he plays a lot. I took Fern to take the SAT on Saturday morning. I got everything ready the night before, pencils, calculator, admission ticket and snacks and told her she needed to take her ID. So, on the way to the test I ask her if she had her ID, and, no, she didn't. I waited in the parking lot for her text telling me if they let her in or not. Yes, she got in, but I needed to bring her ID back before the end of the test. After that it seemed I spent the whole day driving around for this and that.

I've downloaded SimCity™ for my iPad. Of course I got hooked right away. Sims are fickle, stupid people. In my current city I've gotten my population up over 1.2 million people, then for no reason, they move out and my population goes down to 450,000. They they realize the schools are not over crowded and move back in. They complain 2% residential tax rate is too high, but they were fine with the 4% I had set yesterday. They are harder to figure out than teenagers. I tried to upload a screen shot of my city with no luck. I'll try a different method later.

This weekend I'm off to Towson University for the Maryland State Special Olympic Games. Kevin will be swimming again. We got "kicked" out of the dorms this year. The coaches want me to help chaperon, but don't like the fact Kevin tended to wander a little too far for their liking an the block party last year. Thing is, Kevin can wander whether or not we're staying in the dorms. I'm not looking forward to all the down time between races (and the delightful cafeteria food), but Kevin loves it so that's all that matters, right? Maybe I'll try to take some sewing projects with me so I don't get too far behind. Again.