This is what I worked on at quilt retreat this weekend: 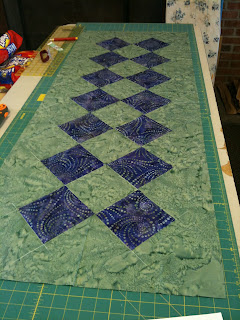 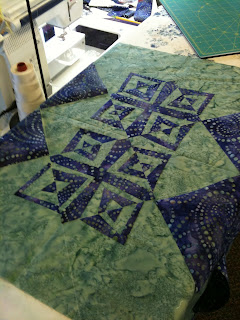 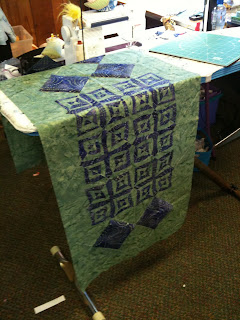 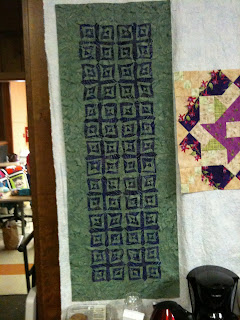 This is a project for my dear high school friend in Florida. She has floor-to-ceiling closets in her bedroom with a 25" space between them. She commissioned me to make something eye-catching to hang there. I'm going to add a couple borders to this, maybe even my "trademark" interlocked knot design I used on the quilt I made for Mom shown below.

This technique was developed by Lisa Walton of Dyed and Gone to Heaven, an inspiring quilter/beader from Oz. I'd love to meet her one day.

And it's remotely related to: quilt retreat, quilting

This is the quilt I finished for my mom last year, the one she plans to redecorate her bedroom around. It won Viewer's choice in the large-pieced category and a Vendor's choice ribbon at our guild's show back in March. It'll hang as an invitational quilt this year. 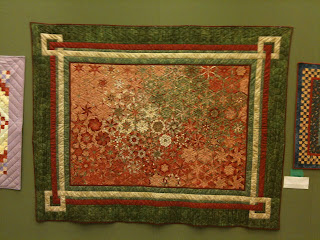 And it's remotely related to: Quilt Show

Pre-planning, that is, for our trip to Europe next month when Mom and I go to Amsterdam, Brussels, and Paris. I figured out We'll have the most free time in Amsterdam, the first day we are there, the day we'll probably be most tired and jet-lagged. We land at 07:30 and have unscheduled time until the welcome reception/orientation that night. Our hotel is just a couple blocks from the Van Gogh and the Rijksmuseum, so we'll have plenty of options.

The rest of the days are scheduled with tours and sight-seeing trips except for an afternoon in Paris when we can take an optional tour of Versailles. I'm torn between that and checking out Mona at the Louvre. Or going up the Eiffel tower (our hotel is two blocks away!).

I won't be able to fine-tune plans until we get our travel documents with a more refined itinerary. Which means I'm back to having that empty lost feeling I wrote about a couple days ago.

OH! but wait....
I'm going to our quilt retreat this weekend. I really really need to start a packing list for that. I'm sure I'll forget to take a project that needs attending too. I have so many started and neglected projects, sheesh. I tend to overpack and be too optimistic about how much I will get finished. Then I start something new and end up having even more projects than I started with.

I'm also running a game on Saturday so I cannot forget to take all I need for that, including prizes.

And I promised to bring a soup for Friday night dinner.

I'm not teaching fabric dyeing this year, Lisa is, so I don't need to pack anything for that. I must not get sucked into that. Must. Not. Dye. Fabric.

I really could use another brick-colored fabric, however, for a current project I really need to finish. It's a quilt to be included in a book a fellow quilter is putting together, and the perfect color would add so much....

Well, that worked well, I haven't thought about missing my favorite literary characters for that past several paragraphs now. D'oh!

And it's remotely related to: books and stories, Going places, quilt retreat

I found something to fill the hole left by finishing the Harry Potter books: trip planning. Mom and I are going to Europe for a couple days next month, Amsterdam, Brussels, and Paris. We'll be on an organized tour but will have some time to ourselves for sightseeing and most of our meals will be on our own as well.

I had some 40% off coupons for Borders so I bought small city guides for Amsterdam and Brussels/Bruges over the weekend and want to buy a book on Paris today. I like to find the hotels and the itinerary stops on the maps, then I can get spatially oriented. I also like to do searches in advance for specialty shops I might like to visit if I have time, like quilt and yarn shops. Oh, and don't forget shopping for Belgian chocolate. I'll pass on the Belgian lace though.

I try not to go overboard with the extras, though, free time will be shorter in reality. The trip is advertised as a 7-day trip, but when it comes down to it, it's really only five days of actual touring and the other two days are travel days. I'm not upset, all tour companies and cruise lines do this, make a trip sound fuller than it is. I just can't go overboard on a list of little side trips.

And it's remotely related to: Going places

If you thought I meant HP, the computer company, just move along now.

I'm rereading the Harry Potter books, much to the chagrin of my husband, "They are kids books, you know" ... "Haven't you read them each a dozen times already?"

Well, no. In the beginning I read them to Fern at bedtime, it was our thing. I'd put on my best UK accent and read a chapter or two a night, it was a cozy time. When a new book would come out, we would read it together, then I couldn't stand the slow pace anymore and plowed ahead on my own after her lights went out, only to reread those sections again the next night.

Fern was too old for a snuggly reading bedtime reading routine when Goblet came out, so I ended up reading it only once, same with the subsequent volumes. Then there were the movies. When the book is fresh in your mind, you pick out all the things they left out of the film, and rightfully so, there is just too much detail to cram into a reasonably lengthed production. But as the years go by, the visual memories created by each movie replace the memories created by reading the story in the first place.

So now, I've been reading all seven books again, back-to-back-to-back (forsaking other leisure activites, quilting) and have really grown attached to Potter and his friends. I'm also amazed, reliving the whole story, about the amount of details and clues JK Rowling left for us along the way. [I could also point out inconsistencies over these seven years, (the thestrals, for example) but I'm not going to.] If you've read the series yourself, you know the importance of the horcruxes in the final book, yet she mentions two of them in passing several books before the last one. The major hinging point of the final showdown at the end of book seven is given in book six, the clue to how Harry can face He-Who-Must-Not-Be-Named with a shred of hope.

Yes, to Dan's other point, they are not deep pieces of literature, they are not kept in the adult section of the bookstore, but I enjoy them just the same. I've tried to figure out exactly why I love these stories so much. And I can't, exactly. Yes, there's the feeling of parental hope that the children grow up smart, strong, and loved, and yes, they are fun tales of good versus evil. I guess maybe, it's like getting sucked into Lost for all those years, living vicariously through others.

Currently, as I write this, I'm about a hundred pages from the end of the last book and I expect to finish it tonight, the last big battle between Harry and Vol-, you know who. I better have some tissues with me, I hate the death scenes.

And now, I've got about a hundred pages in which to prepare myself for the end. I'll need to get back to my quilting to keep my mind off the loss of these fictitious people friends....Until the movie in July, anyway.

And it's remotely related to: books and stories, pass the tissues please

Giveaway… Happy Day for All

Giveaway… Happy Day for All

Over the last couple weeks I've actually been using my Netflix account (instead of keeping the discs for 4 months at a time) and have watched four foreign films in a row. Three were the "Dragon Tattoo" trilogy. (Truth be told, the third in the trilogy isn't out on DVD yet, but we watched it on pay-per-view.) I hear Hollywood is making an American version of these movies, but I bet they won't be as good. Watching a movie that takes place in Sweden is much more authentic when it's shot in Swedish.

Watching sub-titled films is also interesting because you've got to watch. You can't just wander up to the kitchen to fix a snack keeping an ear on the movie, all you hear is Swedish dialog, and unless you've interned in Stockholm, you've got to hit pause to get that snack. You still have to have the sound up when you're reading the subtitles so you can hear the intonation and emotion in the voices.

The forth movie was "Bread and Tulips," an Italian film made in 2000 about a woman who gets inadvertently left at a rest stop while on a vacation bus tour. She decides to go to Venice before meeting back up with her family at home, but she misses the train home and the rest of the story unfolds. Italian men yell a lot. I never read the subtitles with as much force as I heard from the voices. Americans wouldn't do it justice.

I can't remember how this film got added to my Netflix queue, I'm sure it's been there for years and finally just bubbled to the top. I think a French spy spoof is next. That should be fun. More subtitles!

What have you watched lately?