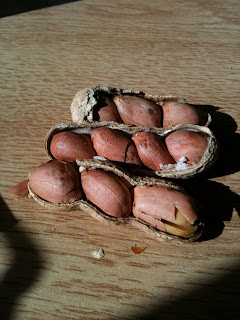 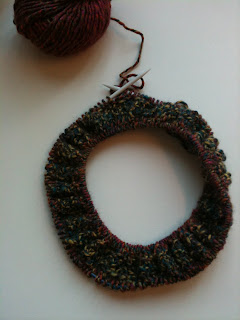 This is the moëbius scarf Fern and I are working on.

To make this, provisionally cast-on 150 or more stitches on a 36" circular needle, size 9-13, with worsted weight yarn. Knit across in your desired pattern (seed stitch, lace pattern, etc.). Now, remove the provisional cast-on and keep knitting your pattern. You will have 300+ stitches on the needle and the circular needle cable will loop around. The first few rows are the hardest because there's no give yet. As you keep going, your piece will get wider and wider. Cast off when you get bored or run out of yarn.

And it's remotely related to: knitting

Another Pair of Socks 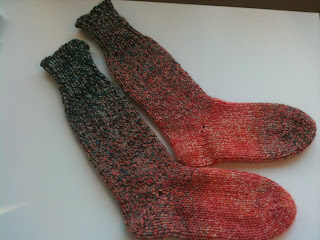 I finished these the other day. I love using the worsted weight yarn, the socks knit up so quickly.

Now Fern and I are working on a knitted Möbius strip scarf. The hard way. The easy way is to knit a flat strip and when you're done twist it once and join the ends. The hard way is to knit all at once on extra long circular needles. I'll have to take a picture of it. It's not hard once you get it started. I'm making her work on it too, so it'll be hers when it's done.

And it's remotely related to: knitting 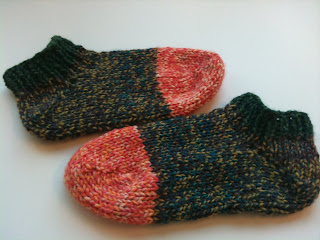 These are scrap yarn footies made from the left-overs from all those socks I knitted for Christmas presents three or four years ago. After Fern shrunk the wool+bamboo pair I just finished (to a size a four-year-old could wear), I had to make another pair with a blend that won't shrink.

These are the first socks I've made toe-up. I used a provisional cast-on and a short-row toe, both firsts for me. I like learning new things, keeps me young. Right? My daughter's ice skating coach thought I was 39. Love her.

I have too many unfinished quilts to be back into knitting. Oh well. I'll get tired of this soon.

And it's remotely related to: knitting, laundry, obsessions, oops, photo from the iPhone

Yesterday was the first really chilly day so far this fall and when I got in the car to go home the tire pressure light had come on. It seems to come on every year on the first chilly day of the fall. So, today, I wore a jacket to work and put air in my tires.

When I took the girls to the beach a couple weeks ago I bought a ball of wool+bamboo yarn and knit up a pair of socks. I hadn't been in a knitting mood for quite a while and when I finished with that pair I managed to buy two new sock knitting books. One of the books had several patterns using two or more colors of yarn. I've never done anything with more than one color so I tried it out: 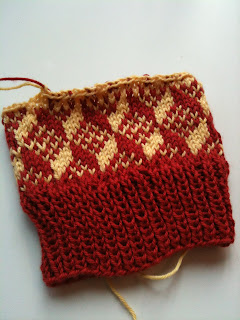 I got through one iteration of the pattern and stopped. Knitting with two colors was easier than I expected, but it was also harder. Controlling the two different yarns wasn't as difficult as I thought it might be, but the knitted fabric doesn't stretch like pieces made with one color do. I need to relax the yarn that's not being used at the moment, if it's too tight, the piece doesn't give. It's hard to pull on socks that don't give. Next time I consider a sock pattern I won't shy away from the two-color ones.

And it's remotely related to: car troubles, knitting

The weekend ended with more rain. We had gotten 5.12 inches from Wednesday evening to Friday morning. Saturday and Sunday were pretty, but the rain started right after I filled the tank on the ride back from Winchester and the rain gauge collected another half inch over night.

Fern and her boyfriend and I went out to Winchester for my mom's art show reception. She didn't know we were coming, it was a nice surprise. My mom has been a member of the Blandy Sketch Group (not just for sketchers) for several years now and they have an annual show of members works.

Something has happened to Fern. I'm not complaining, I've just noticed. I think maybe her "terrible teens" years are over, or in remission. She's been pleasant, I've been getting hugs, she's not defiant, and she wanted to go to see her grandmother, whereas in the past, no way, "Grandma's weird…do we have to?" And, she wanted to take the BF with us. When we got home she said he had a good time and wanted to go back.

The rest of the weekend was boring, I got 5½ loads of laundry done (the other half load is still in the dryer). I got caught up on some of my shows on the DVR, but now have Amazing Race from last night to watch. I did watch a lot of the Ryder Cup over the weekend, too. Oh, speaking of golf, I bought a new set of woman's irons last weekend and tried them out on Saturday. Not good. I need to break them in before I play with them.

Maybe I'll try to post more often, work is in my busy season so no promises.